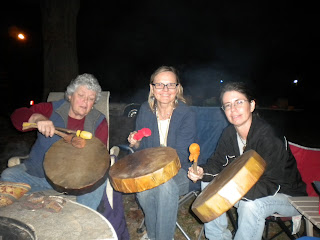 Once Upon a Time the Drumming began. The Call was going out for Women of all Ages to Circle where ever they were.

The Drumming Sounds permeated the Air, the Oceans, the Mountains, Trees and Ground. The Drumming Seeped into their Minds and Hearts.

Once Upon a Time the Drumming Began! It was Time, but not All were Open to Her Voice. Not All could Circle, not All Remembered.

The Drumming became Louder. Circles Grew larger but still there were those Unable to Hear; those with no One to Teach them to Listen and Respond.

The Drumming will Not Cease! The Drumming is the Mother's Heartbeat and She is ready to give Birth to Her Daughters.

The Great Memory Loss is Ending its Reign over Women!

Listen Sisters of all Ages and Prepare for your Delivery!

Once Upon a Time the Drumming Continued.......

Once Upon a Time a Woman Stands in the Middle of the Canyon of Grief, Red Earth clinging to her Delicate Feet. She had Walked a long Way and finally Arrived at her Destination.

This Woman Stands, Reaches her Arms to the Sky and begins to Sing.

Once Upon a Time a Woman Traveled a long Way to Arrive at the Canyon of Grief to Sing her Song of Lost Love!

Then her time of Singing was Done. She had no more Tears to Cry, no more Words to Sing.

Once Upon a Time a Woman Traveled a long Way to Arrive at the Canyon of Grief. She Lifted her Arms to the Sky. And she Flew! She Flew away from her Time of Singing her Song of Lost Love.

She Soared over the Canyon and into her new Life. Never again to be Grounded, but now Free to Fly. She earned her Wings of Freedom and flew out of the Canyon of Grief into her Amazing Life.

Once Upon a Time a Woman Stands in the Middle of the Canyon of Grief....... 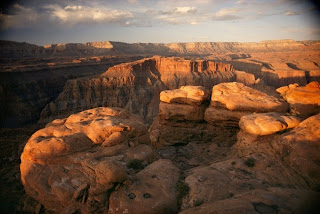 Posted by Sunshine Fae at 8:30 AM No comments:

Once Upon A Time, but right before Bedtime; when the Shadows begin to Creep into the Playroom, a Little Girl sits in the midst of her Toy Friends. She Waits for her Crystal Spaceship to come out from behind the Chest and take her on an Adventure!

Slowly she sees Rainbows dancing on the Walls as the last bit of Sunlight bounces off her Transport to Places Far Far Away!

Once Upon A Time, right before Bedtime, when the Shadows begin to Creep into the Playroom, the Little Girl takes in a Deep Breath and Melts into the Crystal Ball.

Her Fae Friends greet her and Dance with Joy at her Arrival. She looks through the Crystal Windows and waves Goodbye to the Playroom!

Night will come quickly and there is much to do; Flying through the Stars and All!

"It's Magick!" The Little Girl cries out as they pass Orion, Scorpius and Ophiuchus. The Fae Friends Laugh 'cause she Always says the Same thing.

"Where are the Cows?" The Little Girl Giggles as they fly through the Milky Way! The Fae Friends Laugh 'cause she Always says the Same thing.

"I don't want to Go back!" The Little Girl said with Tears in her Eyes. All of her Fae Friends Stopped and Stared. She Never said this before.

"But you Have to Go back! The Fae say to her.

"Your Family will Miss you!"

"Your Toys will be Lonely!"

"Your Kitty will not eat!"

"But I want to Fly Here all the Time and soon I will be too Big to Ride in my Crystal Spaceship!" The Little Girl sobbed.

"Oh, but No, our Little Sister! You can Fly here any Time you want!" Sang the Fae Friends!

And so Once Upon A Time, right before Bedtime, when the Shadows begin to Creep into the Playroom, the Little Girl Learned about IMAGINATION and DREAMS!

And she Lived Happily Ever After! 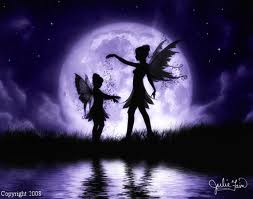 Posted by Sunshine Fae at 8:47 PM No comments: 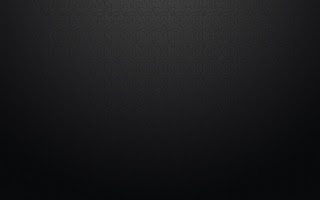 Once Upon A Time there was only Darkness. No Stars, No Moon, No Sun, No Planets, No Light. Only Darkness!

And yet They Gathered!

They arrived from all over the Planet. They arrived on Foot, in Carriages, on Horseback, on Magic Carpets and Brooms.

The Witches, the Seers, the Mystics and the Healers. They Gathered as the Great Darkness smothered the Earth.

The Religious had found a way to bring the Darkness into Being. Power and Control Dimmed the Light. Speaking Evil more than Goodness finally Pulled all the Plugs.

And so They Gathered!

They were the only Ones NOT filled with Fear. While the rest of the World cowered, wailed and beat their breasts, They Gathered!

The Elves, the Fae, the Trolls, the Tree People, the Animals, the Rock People. They Gathered!

They had Waited and They had Watched knowing Darkness was Coming. It was being Called in by those full of Hate but calling it Love.

And so they Gathered!

The Birds of the Air, the Fish and Mammals of the Great Seas, the Dragons and Unicorns,.

And as They Gathered, Stars began to Twinkle, sparingly at first, but then Sending Messages of Encouragement for the Journey. 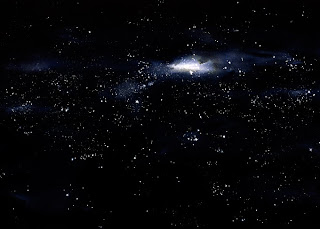 As the Fireflies arrived, Venus, Mercury, Jupiter and the Others took their rightful places in the Sky.

Oh so slowly the Heartbeat of Mother began to Pulsate in the Heavens. And the Cloak of Darkness disintegrated. There in Glory was Grandmother Moon and Grandfather Sun! 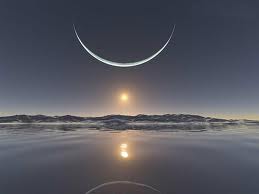 Those who had always held the Light Gathered. And they filled the Earth!

And Goddess Smiled as Her Garden Returned! 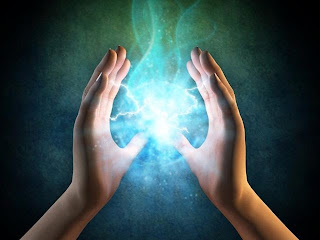 Posted by Sunshine Fae at 10:10 AM No comments: 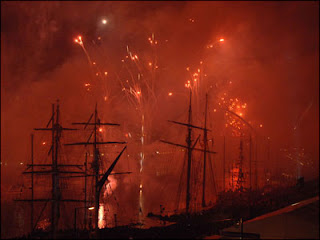 Once Upon A Time, and maybe just Yesterday or Today, the Sky lit up with Bright Lights and Colors!

Once Upon A Time, and maybe just Yesterday or Today, dogs ran under Beds, Children held their ears and Parents assured them all was Fine!

Yes, Once Upon A Time, and maybe Yesterday or Today, Smoke filled the Air after 30 minutes of Bright Lights and Ear numbing Noise.

And then the Stillness. The incredible Heart Stopping Stillness!

Soon Dogs came out from under the Bed, Children uncovered their Ears and their Parents looked around and then Covered their Children's Eyes from the Death laying all around them.

Posted by Sunshine Fae at 9:51 AM No comments: 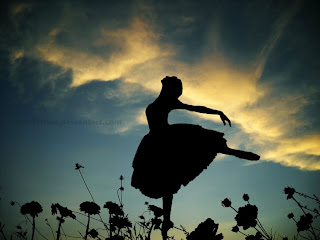 Once Upon A Time She Danced! Oh how She Danced! She Twirled, she Jumped, she Plied, she Tapped and she Leaped like no other.

She seemed to have invisible Wings that Carried her through the Air. It was like she was Dancing on the Clouds.

She Danced! Oh how she Danced!

And They came to watch her Dance! They oooed and aahhed! They Clapped and Roared! They sat in Amazement and she Danced!

She Fell! Most unexpected was this Fall! And the Dancing stopped. The Lights went out. The People Disappeared.

Tears were Cried in the Pits of the Darkness. And the Dancing Stopped. The Dancing stopped for a very very long Time.

Sadness! Oh how much Sadness!

He came in a Dream. He came to Dance with Her. But she had Forgotten. Her Legs no longer Moved. Her Arms laid Heavy by her Side.

He came in a Dream and their Hearts Re-membered the Steps of the Dance. Their Hearts Jumped, Tapped, Plied and Leaped. Their Hearts flowed through the Air as if on invisible Wings.

She Danced. Oh how she Danced. She Danced as he Believed, in her and for her!

Their Hearts Re-membered the Wholeness of the Dance.

Posted by Sunshine Fae at 12:31 AM No comments: 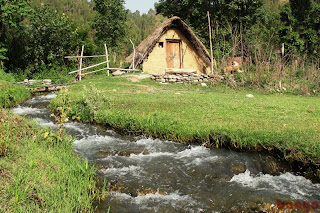 Once Upon a Time a Small Hut sat by a Stream. The Hut was nestled amongst Trees of Different kinds; the Mighty Oak, the Temperamental Maple; the Proud Birch and the Flowering Dogwood. Ivy was attempting of smother the Small Hut, but She fought hard to keep Breathing by Shaking hard when the cold Winds of Winter came upon Her.

The Small Hut was beginning to feel very Old. Her Door had come unhinged years ago and many of the Shingles had Blown off Her once sturdy Roof.

Her Inside was Dusty and overtaken by Leaves and Cobwebs. Spring was fun as the Starlings and Blue Birds came in through the holes in the Roof and Nested in her Rafters. Listening to the sweet Chirps of the newly Hatched babies and the Songs of their Parents filled Her otherwise Lonely Days.

Summer brought the Sweet Smells of the Lilacs and Roses Growing Wild around Her. Autumn Leaves tickled Her Walls and She loved the pretty Colors as they Adorned Her Porch.

But Winter. Oh Winter! The Cold now Creeps through the Holes in Her Flooring and Walls. The Icicles pull on Her Gutters and it is oh so Cold and Lonely.

And so Winter is when The Small Hut Cherishes the Memories of Younger Times. She Remembered the Hikers who would Stop for a night or two; the Young Couple who Conceived their first child while snuggled inside their Sleeping Bag; and the Monk who would come and Meditate Seeking His God.

The Small Hut Remembered the Teenage Girls who ran away from Home, got Lost, and found Refuge within Her Protective walls until they were Found.

But Her favorite Memory was when the Women would Gather at each Full Moon. They would Dance and Sing, they would Laugh and Cry, they would call down the Moon's Energy and The Small Hut felt Alive and Pulsated along with the Women.

Soon the Gathering got smaller and eventually no One came! No One Came At All! The Small Hut was Alone except for the Birds, the Trees, the Flowers, the Stream, the Sun and Moon, and the Air. And best of all Her Memories!

All Reminded Her that She wasn't Alone. And The Small Hut smiled as a Squirrel crawled out of her Nest and Ran outside the unhinged Door! Spring had Arrived!

She had never been Alone!