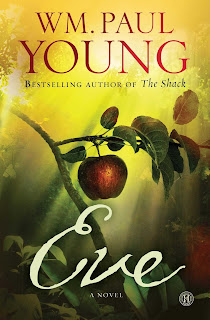 I don't think I have ever done a book review here on my blog, but after reading Eve by Wm. Paul Young I just knew I had to find a way to get out my frustration! So this will be a book review like none other, I am sure!

So, this Young guy is the "bestselling author of The Shack." Yes, I read the Shack when I was a Christian and jumped for joy that God was a huge black woman! I had many upset parishioners claiming blasphemy at such a thought, and I would gently remind them that it was a piece of fiction and not a theological writing; all the while giggling inside myself.

So, I thought Eve just had to be about Eve being God or in control of the entire creation thing, etc. Oh was I surprised.

Now it took a bit to get to it. This book has a "sci-fi" lend to it, but there it came.... slapped me right in the face. Now Young calls this Male God, Adonani. (which is in fact one of God's names) So, Lily, who has come a a Witness to Creation, watches as Adonani bears down in labor and pushes Adam out of HIS (yep, that pronoun is used for Adonani) God womb. And then, Adonani lifts Adam to HIS breasts and feeds HIS most glorious creation. Ok, I almost stopped reading at that point. (As a Christian teenager I was almost thrown out of Sunday School class when I objected to a Male God giving birth to anything!)

But alas, I kept reading.

Well, Adam gets bored of naming all the animals and demands that Adonani give him someone like himself. So, Adam becomes PREGNANT with Eve, and Adonani has to perform a C-Section (my words here, in the book it says Adonani cut Eve out of Adam). And then holy fucking shit.... Adam nurses Eve at his breasts, and then raises her to adulthood which in Eden time takes like one chapter!

Now, I did get a bit interested here when we find out that the serpent and Adam are in cahoots with each other to set Eve up to eat the Fig (not an apple if you want to be biblical). Then when Adonani finds them with the leaves on their private parts Adam and the serpent blame Eve for making them eat the fig and laugh when Adonani seems to believe them. Well, it is Adam who is blamed for the Fall and He is escorted out of the Garden along with the serpent who is now a lowly snake and Eve gets to stay in Eden.

Ok, I thought ..... I like this! BUT here is how the story goes; every day Adam comes to the walls of Eden that he can't see through and begs Eve to come with him. He is so lonely, and life is so hard. Well, Eve can see him and goes to Adonani and tells Him that she wants to go be with Adam. She loves him so much even tho', he set her up, lied, betrayed her, etc etc etc. And she needs to go and be with him. She promised to bear his sons, she misses him so much! And so, she goes and does just that.

Glad it was near the end of the book. I thought I was going to vomit. Supposedly, the point of this story is that God loves HIS children no matter what they do, but they have to suffer for not obeying him. Oh and by the way.... Lilith gets a small part when Lily is told that is who she really is, but omg..... thank goodness that was not true cause Lilith was bad Karma in the "MYTHOLOGICAL story".

Would I recommend this book. HELL NO!!!!

It reminds me of one of the first things the EX said to me when we moved in together. He said, "I am here to help you reach your potential. To become everything you can become." What he meant was HIS POTENTIAL AND EVERYTHING HE WANTED ME TO BECOME. He defined me, just like Adam defined Eve.

Oh Young tried at times to make Eve out to have so much power but in the end she did not. She too turned from this God but she did so in order to turn to her domineering husband.

Here is what part of the back cover says about this book: "Eve opens a refreshing conversation about the equality of men and women within the context of our beginnings, helping us see each other as our Creator does.... complete, unique, and not constrained by cultural rules or limitations."

I must have read a different book.

The end!
Posted by Sunshine Fae at 9:12 AM No comments: