The Fog embraces my part of the Forest today! As I sat on the Balcony having my breakfast of french toast with butter and maple syrup along with slices of an orange and hot cocoa; I had a vision!

There sat Demeter, with her Cauldron bubbling away. The Steam from Her Cauldron slowly moves out onto the world that is now going cold. The leaves have fallen and are being stirred into her pot. The flowers no longer bring color to the Earth and the Pines are the only trees standing tall in their regalia; never to loose it despite their Sweet Goddess's departure to the Underworld. 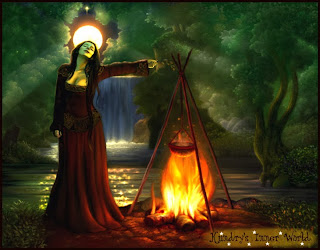 Yes, Persephone has heard the cry of the Underworld and thus has begun her journey downward. As She walks past each Field the ground closes its eyes and goes to sleep. As She passes flowers they bow their beautiful heads and drop off in grief and loss. As She moves among the bears, they slowly but surely find their Caves and begin their long winters sleep. Snakes slither to the underground along with Her and birds fly to warmer parts of the Forest!

And Demeter does not know where She has gone! And so Demeter gazes into Her Cauldron as She would a Crystal Ball trying desperately to find the beauty and sunshine of her Daughter. But alas, the Sun also grieves the departure of Persephone and can not hold the Light for longer periods of time. Shorter and shorter the sunlight becomes which leaves Demeter less and less daylight to search for Her beloved Persephone!

Demeter's tears become the ice cycles that form in the dead of winter and the snow that falls from the sky! But She never stops Searching! It is a Dark time for Demeter. A time of Grief and Loss! A time of having to look under all the rocks and bushes and in dark caves. But the one Dark Cave which would lead her to Persephone is closed off and she passes it by day after day until...... 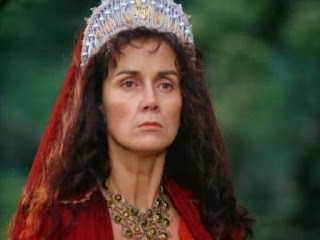 Ah Winter! It beacons us to go inward. To drop our beautiful flowers, our green leaves and find the cave of ourSelves! It is the Time that we are called to Hibernate within ourSelves and face the Shadows and the Death that inhibit our full Blooming and Growth. It is the Time we are called to provide our own sources of Light so that Growth awaits the coming of Spring! Like the Fields it is the time to Lay Fallow and Heal; to Lay Fallow and Rest; to Lay Fallow and Prepare for when we Know it is time to come out into the Light and Warmth of the Spring.

What we forget is that Winter is not only a Physical Season, but a Personal Season. We may be called to do Winter Work in the Summertime or the Spring! If we listen to our Persephone Voice we will know when we must Delve into our WinterTime Journey. It is necessary! And it takes as long as it takes!

Yet we live in a society that does not know how to deal with Withdrawal Times! We don't know what to do when someone is in Grief and Loss (that may be a loved one or grieving of something we must put aside to continue on this Life Journey). And we certainly don't Honor those who aren't going around with a hug smile on their face day after day after day! We don't like when the Dark times come, literally or figuratively.

But they come! And as we know; Persephone Knows when it is time to leave the Underworld and come out into the Playground of Gaia's Garden! She knows because She Listens to Her inner Knowing!

May we be as Wise as Her!

Blessed be and blessed Wintertime!
Posted by Sunshine Fae at 8:53 AM 5 comments:

Wounded Maiden and Night of Hekate!

I took my walk as usual through the bit of forest here in my apartment complex. I am so blessed to have a path to the Lake and a path through a densely wooded area between apartment complexes! I don't know that I could breathe here without mountains if I did not have these two sacred places! But alas this is not my story tonight!

The Path is now covered in leaves and it rained last night. So, I was delighted to stand and breathe in that very familiar fragrance: wet leaves in the cool crisp air of Fall. And it took me back: it took me back to my childhood!

I remembered Dad raking up the leaves and us running and falling in them!
I remembered walking through the Forest (yes, we actually lived at the base of Mill Mountain in Virginia and thus had "real live woods!) in the Fall and loving the Fragrance and the Sounds of the Leaves!

Today as I stood in all the glory of Fall I realized that I did not have a Wounded Childhood! I did not have Inner Child Issues! I am one of the very fortunate Women! And for that I am very very grateful! 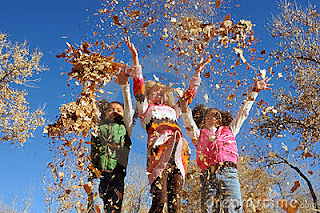 As I stood in all the Glory of Autumn I realized I was a Wounded Maiden.

You see today also is the anniversary of the Day I walked out of an emotional and sexual abusive marriage of 30 years. On this day 11 years ago; my daughter and I moved out and into our own apartment; I was 50 and she was 18! And we could breathe! At last we could breathe and begin our Journey toward finding our own Voices, our own Journeys and our own Truth!

I married this Man two days after my 20th birthday! I was very naive; growing up in a normal family with all it's dysfunction common in the 50's and 60's. We did not have a perfect family by any means, but I was loved and cared for and encouraged to be the person I was meant to be.

And then I married a man who under the cloaks of "we are hippies" said to me over and over that he was there to help me "grow" and "reach my potential", but what he meant was "grow and reach HIS idea of what a woman, as seen in pornography, was suppose to be." Under the cloak of "I am an enlightened Man and really buy into all your Feminist stuff" was a Narcissistic Man who really  thought women should be subservient to men in bed and in the work place. That women were stupid and really didn't know what the hell they were doing if a man was not there to instruct them in how to "be".  I was a Maiden, caught between what I KNEW was my Truth was and what I was being brainwashed into believing was my truth.

So young and naive; so ready to be married and happy; so not ready to have my Voice stolen from me. Funny, tho', I didn't realized I had lost that voice until I watched my daughter grow into her teen years and she too was loosing her Voice!

And so for 11 years I have been Healing the Wounded Maiden! And today She is Healed! She has taken Her place beside the Inner Child, the Mother and now the Crone!

The Healing is complete! Blessed be!

Posted by Sunshine Fae at 5:34 PM No comments: